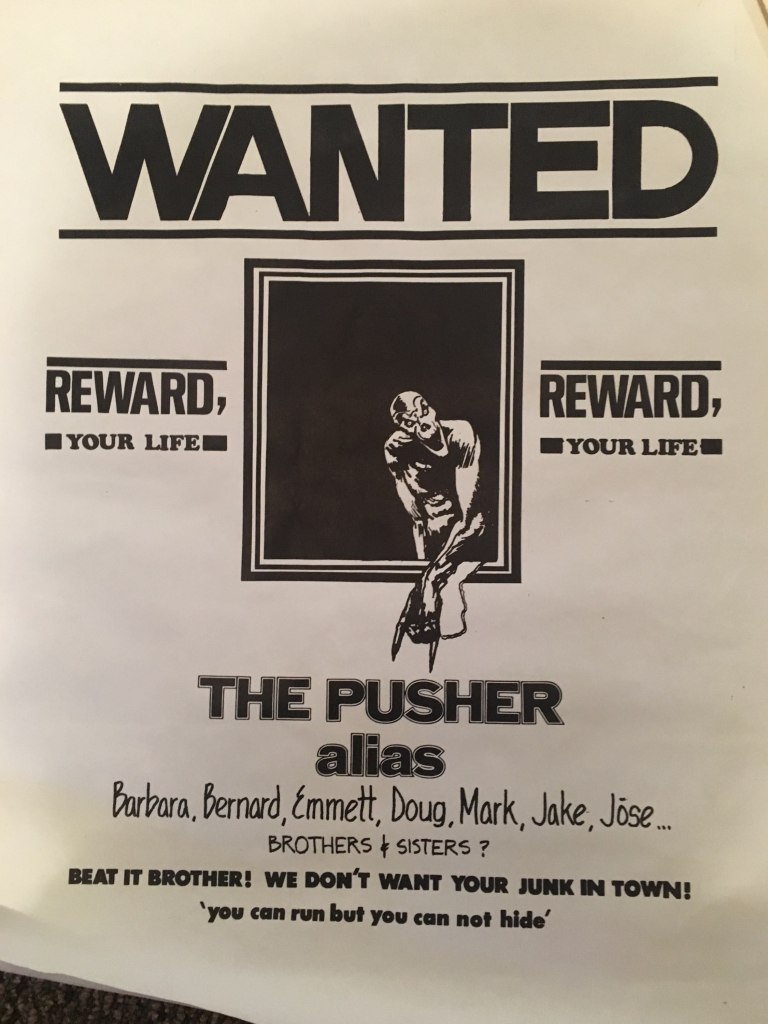 These posters signify one of the finest moments in the hip Boulder Community when it came together in love for each other. For the first time, this is the story behind the posters.

In 1970, a heroin epidemic hit Boulder, Colorado. Large amounts of white H was coming into the country from Vietnam smuggled in the cadavers of US soldiers and making its way to Boulder. The cheap, good and plentiful dope was much stronger than the junkies were used to and as a result, there were many lethal overdoses on the hill.  I witnessed these events from the second-floor window in my store the Cotangent. In conversations with the beat patrol cops I suggested they come to the radio station KRNW where I worked and see what we could do together to form an anti-heroin campaign. At that meeting, the station agreed to put out public service announcements and disseminate information through the different disc jockeys. Great!

I called old friends, Hank Schmidt to make the posters and Scott Coen to write the script. I asked the cops what was they could do for us if it we were successful and they asked what I had in mind. I told them no more walking patrols would be nice for it only caused tension among the street people. I also asked for no arrests for simple possession of an ounce or less of pot.

They agreed, we had a handshake deal, and the station went to work. The first poster printed the first name of all the heroin dealers on the hill with the promise of publishing their last names and photos in the next 10 days. It was a war of words. My windshield was broken and I received phone calls daily telling me not to f*** with the family. I replied that the “Boulder family” would not allow smack here.

Our plan worked.  The dope disappeared and the dealers split. In a couple weeks, the episode of the anti-heroin campaign soon faded away. More about the story will be in book.

PostScript— there is an interesting antidote involving Steve Stills. You can read about it in my forthcoming book. I won’t bash him for free but I will do it for money.